Webinar: Transcript for Motion to Kill 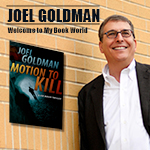 Transcript for Motion to Kill Webinar

This broadcast introduces one of the toughest, most loyal and sometimes reckless lawyers anybody ever made up. His name is Lou Mason and I should know because I’m the guy who created him, along with Wilson Bluestone, Jr., aka Blues, a full-blooded Shawnee Indian man-mountain who always has Lou’s back and Claire Mason, Lou’s aunt and lawyer role-model and a crew of other characters you won’t soon forget.

Lou was orphaned at the age of three and raised by his aunt. Once married and divorced and in his forties, he’s got a wry, sarcastic sense of humor that he uses as a shield the more dangerous things get especially when he can’t help diving into the dark water to save a client or himself. He doubts conventional wisdom and hates bureaucrats and criminals. He’s passionate about justice and women and can’t resist lost causes of either kind.

Motion To Kill is the first book in the Lou Mason Thriller series. Lou has just joined a new law firm, one of those downtown, silk stocking practices where money is the most important client. He’s at the firm’s annual retreat at a resort in the Lake of the Ozarks in southern Missouri. Here’s how the story begins.

A dead partner is bad for business, even if he dies in his sleep. But when he washes ashore on one side of a lake and his boat is found abandoned on the other side, it’s worse. When the sheriff tells the coroner to “cut him open and see what we’ve got,” it’s time to dust off the résumé. And the ink was barely dry on Lou Mason’s.

The time was seven thirty on Sunday morning, July 12. It was too early for dead bodies, too humid for the smell, and just right for the flies and mosquitoes. And it was rotten for identifying the body of a dead partner. These were the moments to remember.

Mason’s dead partner was Richard Sullivan, senior partner in Sullivan & Christenson, his law firm for the last three months. Sullivan was the firm’s rainmaker. He was a sawed-off, in-your-face, thump-your-chest ballbuster. His clients and partners loved the money he made for them, but none of them ever confessed to liking him. Though in his late fifties, he had one of those perpetually mid forties faces. Except that now he was dead, as gray as a Minneapolis winter and bloated from a night in the water.

Sullivan & Christenson was a Kansas City law firm that employed forty lawyers to merge and acquire clients’ assets so they could protect them from taxation before and after death. When bare-knuckled bargaining didn’t get the deal done, they’d sue the bastards. Or defend the firm’s bastard if he was sued   first. Mason’s job was to win regardless of which bastard won the race to the courthouse.

The night before Richard Sullivan’s body was found, Mason fell asleep on a lounge chair at the resort swimming pool. Sheriff Kelly Holt wakes him up from a dream about a case he’d lost for a childhood friend, Tommy Douchant, to tell him that Sullivan is dead.

Tommy rolled back into Mason’s subconscious as he opened his eyes. The voice belonged to a woman standing over him, backlit by the glare of the morning sun. The glistening effect was a mixture of a Madonna halo and a Star Trek transporter. He thought about asking her to beam him up while he rubbed any leftover drool from his chin stubble.

The best he could do was a slightly sleep-slurred, “Yeah, I’m Mason.”

Snappy repartee after spending the night on a bed of vinyl was sometimes the beginning and end of his charm.

Drumroll, please, he silently requested, satisfied that he was really hitting his stride.

“I’m sure you did, Mr. Mason. I’m more interested in whether you know Richard Sullivan.”

Fully awake now, he stood so that he could see her clearly. Khaki uniform, Caribbean blue eyes, Pope County sheriff’s badge, natural, no-sweat beauty, pistol on her hip. A shade shorter   than his six feet, with honey-colored hair that draped the shoulders of a tanned, athletic body. She was a slap-on-the-cuffs dream come true, but her question flattened the fantasy.

“He’s my law partner. Is there a problem?”

“I’d appreciate it if you would come with me. I’ll meet you in the lobby in fifteen minutes. You may want to change first.”

Mason looked down at his beer-stained T-shirt and gym shorts with a hole where the pocket used to be. He realized he was losing on banter and style points.

Sullivan’s death isn’t the only problem Lou’s new law firm is facing. The U.S. Attorney, Franklin St. John, is also investigating the firm and one of its biggest client’s, Victor O’Malley. Mason’s partner and close friend, Scott Daniels, wants Lou to represent the firm in whatever case St. John may bring against them. He presses Lou while they’re having a beer at Lou’s house.

“We’ve got to get out in front on this. Harlan will be overly cautious, too protective. We need someone to investigate the firm’s exposure and get St. John to back off until we figure out what’s going on.”

Mason knew that Scott was right. Harlan was perfect for recruiting clients, but he was a conscientious objector to trench warfare. If St. John was coming after the firm, it would be a bloody fight.

“Bad choice. We’d never be able to control it. You’ve got to do it. You’re new enough to the firm that you’ll have credibility with St. John. You can offer him the dear, departed Sullivan and save the rest of our asses.”

Mason wondered if the bottom of his beer bottle could explain how a simple weekend at the lake had managed to turn into such a nightmare.

“You need someone from outside the firm, someone who’s objective. Someone who won’t be a suspect if it turns out that Sullivan was murdered.”

“Wrong. I need someone I can trust. If Sullivan was killed, who’s going to work harder to clear your name and mine? You or some hired gun that’s got a dozen other cases he’s got to keep track of? ”

Mason sometimes made poor choices when people made him feel like a badly needed, ungrateful shit. The last one had required a divorce to correct it.

“Okay. Let’s see what happens in the morning,” Mason hedged. It was a half promise Scott would make him honor.

Lou makes good on his promise and starts digging. Kelly Holt tells him that Sullivan was murdered. When their investigations overlap, their attraction to one another grows, adding another complication to Lou’s life. They find time for dinner, afterward going for a walk.

They left, strolling past the outdoor sculptures, weaving in and out of the crowd that jammed the shop-filled streets. Mason remembered the first night he walked on the Plaza with a girl and tried to hold hands with her. They were sweaty-palmed teenagers whose fingers accidentally brushed together. He was so proud when she didn’t pull her hand away. Kelly slipped her hand into his like they’d done it a thousand times before.

They wandered to the eastern edge of the Plaza, hands intertwined, arms swaying slightly to their newfound rhythm. Sitting on the edge of a fountain, they watched as the mist fractured the fading sunlight into miniature rainbows. Last week’s heat had marched east, leaving the city host to a cool front. The air cleared as the temperature dropped, turning the evening into one that demanded sleeping under the stars.

They filled the space with a stream-of-consciousness zigzag through baseball, modern art, and celebrity look-alikes.

“When I was eighteen, older women said I looked like Dustin Hoffman. Fifteen years later, a girl at Baskin-Robbins told me I was a dead ringer for Tom Cruise. Go figure.”

“They saw what they wanted to see. Who do I remind you of?”

“No one I’ve ever known.” “Now, there’s a good approach, Counselor.”

First kisses are promises. Hers was moist and soft. Second kisses are offers. His was plain. Third kisses are answers. Hers would have to wait.

“So who’s on your short list of suspects?” she asked, pulling back.

“You really know how to keep a guy’s interest.”

“I told you I was a tough interrogator. I was just softening you up.”

“Soft is not where I was headed.”

When the other named partner in the law firm, Harlan Christenson, is murdered, his neck snapped like dry twigs, no one is safe, including Mason. When Lou’s investigation rattles Victor O’Malley, his friend, Scott Daniels, convinces the partners to throw him out of the law firm and to the wolves.

Scott cleared his throat and began the meeting.

“I received a very disturbing call from Victor O’Malley last night. He’s fired us because of the way Lou handled the grand jury subpoena.”

He spoke with real regret, underscoring with understatement the gravity of their situation.

“Bullshit!” Mason said, slamming his palm on the table. “He fired us because he didn’t want to tell me how he hung us out to dry for St. John. We’re better off without him anyway. Now we can concentrate on our own defense.”

“Lou, you’re dead wrong,” Scott said. “I trusted you with this job out of friendship. I tried to warn you— told you to leave O’Malley to me. But you wouldn’t listen. You had to do it your way. Now the firm’s existence is in jeopardy.”

“You haven’t been here long enough to understand the relationship with O’Malley. Everyone here except you and Sandra grew up with this firm. We’ve never had a problem like this.”

“The two senior partners have never been killed in the same week either. O’Malley isn’t blaming me for that too, is he?”

“That’s part of your problem, Lou. You think that a few wisecracks will solve everything. The rest of us don’t find any humor in losing our practice because the new kid on the block turned out to be a loose cannon.”

“Look, we were going to have to dump O’Malley anyway. We’ve got a conflict of interest with him that even a Republican could recognize. Let’s move on and figure out what we’re going to do next.”

“We’ve done that already. This wouldn’t have happened if we were as close-knit as we used  to be. We have to make changes if this firm is going to survive. “Leave your parking garage access card on your desk,” Scott continued. “We’ll forward your final paycheck and refunded capital contributions as provided in the partnership agreement. Your personal belongings will be sent to your home. I want you out of these offices now!”

Lou may have been fired but he won’t quit until he finds out who murdered Richard Sullivan and Harlan Christenson even if it means making himself a target for a hit man. Find out what happens in Motion To Kill.