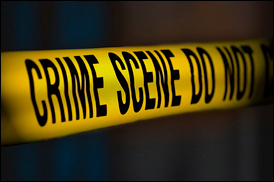 The crime scene is more than the chalk outline marking where the victim falls. It’s the world surrounding that pale silhouette, spreading out in uneven ripples from the perimeter cordoned off with yellow tape to the metes and bounds of the jurisdiction that investigates and prosecutes the offense to the ill-defined society that wittingly or not harbors a killer in its midst.

The place where these overlapping scenes congeal and conspire is as alive and organic as any flesh and blood character. It makes and breaks promises, rewards strength and punishes weakness. It fills hearts with hope and drains them without a backward glance. Done right, place becomes a central character, casting heroes and villains against a geographic backdrop, driving the action as surely as any twitchy trigger finger.

Los Angeles has been immortalized as a place character by crime writers from Raymond Chandler to Michael Connelly. Dennis Lehane created domineering characters in the Points and the Flats of Boston while Elmore Leonard gave Detroit a singular pulse. George Pelecanos made real Washington, D.C.’s struggle to provide justice for all. New York’s literary parents are legion and legendary. Fictional places are no less powerful characters as Scott Turow and Nancy Pickard proved with their creations of Kindle County and Small Plains, KS. Read and listen to a terrific four-part series on NPR as Michael Connelly and three other world class mystery writers talk about the places that are characters in their crime novels.

My thriller books take place in my hometown of Kansas City where my family has lived for a hundred years. One of my great-grandfathers left Poland in 1881 for the New World under cover of darkness rather than marry the girl his parents had chosen for him, settling in Kansas City for reasons lost to time. Another great-grandfather, also from Eastern Europe, ran a grocery store in Alaska during the gold rush, later deciding to move to Kansas City because it was in the center of the country. My grandfather and a friend, down on their luck during the Depression, asked Kansas City’s legendary boss, Tom Pendergast, for permission to sell the scrap from the construction of Bagnel Dam at the Lake of the Ozarks, giving birth to a salvage business that lasted more than forty years. I don’t know whether these stories are true but I subscribe to this quote from one of my favorite movies, The Man Who Shot Liberty Valance: When legend becomes fact, print the legend.

Originally nothing more than a trading post at the confluence of the Missouri and Kansas rivers, in 1838 the founders decided against naming it Possum Trot, settling for the more visionary Town of Kansas, later incorporating it as Kansas City in 1850. Once a wide-open town known for speakeasies, jazz and corrupt machine politics, everything has always been up to date in Kansas City. Mindful of its wooly past, Kansas City has a hard edge and soft heart.

Today, Kansas City is home to more than two million people spread over 380 square miles, though less than a fourth of them live inside the legal boundaries of Kansas City, MO. The metropolitan area covers territory straddling the Missouri-Kansas state line, from the airport north of the Missouri River, to the NASCAR track across the state line in western Wyandotte County, Kansas, to the Truman Sports Complex in eastern Jackson County, Missouri. There are better than forty municipalities spread over five counties and two states, enough for everyone to claim a fiefdom yet many will tell a stranger that they live in Kansas City rather than Raytown, Prairie Village, Independence or Overland Park. The southern reaches aren’t identified with an iconic landmark. In Johnson County on the Kansas side, they are defined by large, new and expensive rooftops sheltering more per capita disposable income than all but a handful of the country’s zip codes, extending beyond the eye’s reach much as prairie grasses must have in another time. The rooftops on the Missouri side are smaller, older and modest, covering the working middle class. Despite its reach, you can drive from one edge of the metropolitan area to the other in forty-five minutes, sixty in traffic.