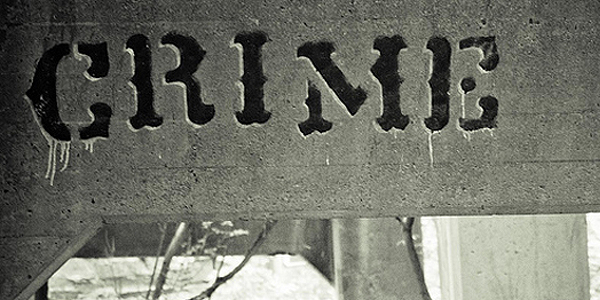 NPR’s summertime series Crime in the City focuses on fictional detectives and the cities they call home. It’s very interesting to hear the featured authors talk about their cities and how they incorporate the nuances and flavor of these places into their crime novels. 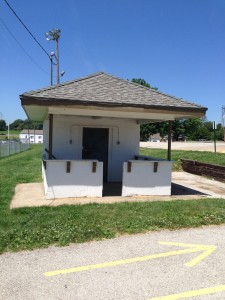 Utility building we found on our tour.

The Crime in the City reporters explore this concept as well as other personal aspects of the “fictional detectives” they interview. This summer the special series has aired conversations with authors, including me, from a diverse group of cities: Ann Arbor, Michigan; Honolulu, Hawaii; Atlanta, Georgia; Toronto, Canada; Belfast, Ireland; Oslo, Norway; and, of course, Kansas City, my hometown.

The last week in June, I spent two days with Kathy Lohr, national correspondent for NPR. We toured numerous locations in the Kansas City area that appear in the first of the Jack Davis crime thrillers, Shakedown, and the other books. We had a great time every step of the way. At each stop, Kathy questioned me about the significance of the location to the story, the history of Kansas City, and me.

We covered much of the same ground Jack Davis does in the city. We walked down a forty-foot, stone-strewn embankment to reach the edge of the Missouri River — both of us feigning disappointment that we didn’t find any bodies floating by as many a murder victim has been dumped into its muddy, brown water. 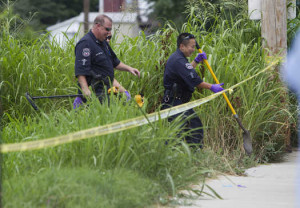 The next day we visited the Quindaro neighborhood where Jack’s story kicks off with the massacre of a drug gang. Then we ventured to Strawberry Hill, a community where the dark secrets are buried deep, to the Argentine rail yard where killers ply their trade. Our last stop was Matney Park, an obscure, barely maintained patch of green where Jack finds the entrance to a cave located in an old utility building, in which he comes face-to-face with those who’ve betrayed him and his family.

True crime stories about murders, corruption, and the numerous other illegal activities occurring in and around Kansas City have inspired many a plot and sub-plot for my suspense novels. But these real-life tales about the seedier elements in my beloved hometown aren’t the only things that significantly impact the storylines in my books.

I talked to Kathy about getting diagnosed with a rare movement disorder nine years ago and why I gave FBI Special Agent Jack Davis the same disorder. I wanted to use Jack Davis to shed light on the challenges people face when coping with disabilities and events. The disorder causes Jack to shake uncontrollably at times, with episodes coming on rapidly and without warning. He’s been hiding his condition from his colleagues in the FBI, but gets exposed in a very public way during a confrontation with a criminal. Now that everyone knows about his disorder, he’s forced to come to terms with the reality and take more deliberate steps to cope with it.

It was a gift to be able to write about the impact of this disorder – to express the experience through Jack’s eyes and his heart. I found it freeing to use Jack as a conduit to describe what happened and what it was like. I think it’s vitally important to raise awareness about healthy and effective ways people can cope with life altering disabilities or other significant challenges. I’d like to urge everyone to remember that while we usually can’t choose what happens to us, we can choose how we deal with these things.

You can listen to my conversation with Kathy Lohr that aired on NPR radio this past Monday, July 15th.

Get to know Jack and walk with him as his relentless internal drive to bring criminals to justice expose him to heart-stopping danger by reading all three Jack Davis thriller novels. Order Shakedown, The Dead Man, and No Way Out today for page-turning suspense with a deeper message for all.

Have you ever identified with a character in a novel on a very personal level? Or developed a character based on your personal challenges and experiences? Please share your experience with me.

One Response to “Writing Fiction – Crime in the City”