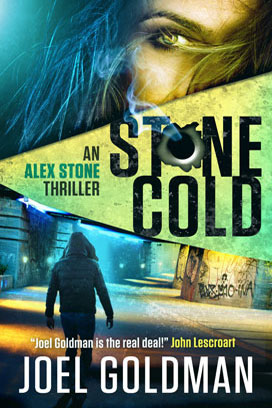 Is it ever ok to cross the line? Just how far would you go to protect those you love?

When Public defender Alex Stone wins an acquittal for her client, Dwayne Reed, accused of murdering a fellow drug dealer, Alex fears that Reed may murder an entire family in retribution for damaging testimony at his trial. If that weren’t enough, the man she put it on the line for in court threatens to attack her lover, Dr. Bonnie Long. With surprising twists and gut-wrenching suspense, this riveting story will keep you on the edge as you see just how far Alex will go to protect the innocent.

Alex Stone is running out of time to stop what she started in the courtroom – cold-blooded murder.

Don’t get left out in the cold…buy your copy of Stone Cold today and enter the dark and dangerous world of Alex Stone.

If you enjoy the courtroom suspense you get from authors like John Grisham and Scott Turow, you’ll love my books.

Buy Stone Cold now and get started with the first book in the riveting Alex Stone Thriller Series.

“Your Honor, you can’t let the jury see these photographs, not if my client is going to get a fair trial,” Alex Stone said, thrusting an eight by ten glossy toward the judge. “The victim’s severed penis is sticking out of his mouth! But that’s not even the worst one.” She threw the photograph onto her counsel table and picked up another. “This one with the rats is beyond the pale even for a prosecutor running for reelection like Mr. Bradshaw. And the other ten are no better.”

Tommy Bradshaw answered, his calm demeanor a parent’s rebuke. “Then the defendant shouldn’t have cut off Wilfred Donaire’s penis and stuffed it down his throat. And he shouldn’t have gutted Mr. Donaire and left him in his backyard so the rats could turn him into an all you can eat buffet.”

They’d battled each other since law school, staying up all night drinking and arguing the law or giving each other advice about their love lives. They were on law review together and graduated in the top ten of their class.

They remained close after law school, duking it out in court, soothing their wounds afterward over drinks and dinner, sharing holidays and regular days, good or bad. Alex couldn’t think of another person she’d shared so much of herself with except for her partner, Bonnie. But none of that entitled Bradshaw to an inch of slack in the courtroom.

Alex wheeled around, glaring at him. “That is exactly what I’m talking about, Your Honor. Mr. Bradshaw wants to inflame the jury with these disgusting photographs and hopes they’ll forget that there’s no physical evidence to tie my client, Dwayne Reed, to this crime. He has to prove more before he should be allowed to poison the jury.”

Bradshaw stroked his chin, shook his head, and offered the gap toothed smile that helped get him reelected as Jackson County prosecuting attorney the year before, the first African American to occupy the office.

“We’ve done plenty. For starters, we know from the witnesses that have already testified that the defendant and the victim, Wilfred Donaire, were rival drug dealers. We know that Dwayne Reed threatened not only to kill Mr. Donaire but that he would, and I quote, ‘cut the motherfucker’s dick off and shove it down his throat if he don’t stay off my fucking corners.’”

Alex jumped on Bradshaw’s argument. “And every one of those witnesses made a deal with the prosecutor in exchange for their testimony. They’re back on the street selling drugs, and my client is on trial.”

“Judge,” Bradshaw said, “we argued this issue at the preliminary hearing and again during pretrial motions. You made the same ruling both times and said that you’d allow this evidence to come in. Nothing has changed.”

Judge William West, heavyset, with hooded eyes, rocked back in his chair, looking down on the attorneys from his perch behind the bench. Known by the criminal defense bar as Wild West, he was a prosecutor’s best friend, giving the prosecution the close calls and handing down the stiffest sentences. His courtroom was the last place Alex wanted to be with a client like Dwayne Reed.

“And,” the judge said, “I told Ms. Stone I would allow her to raise the issue again at trial before I let the jury see the pictures. I’ve excused them from the courtroom so that both of you could put everything on the record that you want before I make a final ruling. Now, Ms. Stone, do you have anything else to say on this matter?”

Alex ran her fingers through her short brown hair, twisting the ends, an unconscious habit from childhood that cropped up whenever she was stressed.

They’d been arguing over the photos for half an hour. It was a lost cause. She’d known that from the start, but she was a public defender who specialized in lost causes, defending the Constitution as much as her clients.

The dismal odds only encouraged her. Long, lean, and ropy from years of earlymorning workouts, she knew only one way to live and one way to try a case: bear down and go all out.

Judge West hadn’t let her drag out the argument because he might change his mind. He’d done it so that the appellate court would realize that he’d bent over backward to be fair to Dwayne Reed, and would uphold his conviction. She was spinning her wheels and everyone in the courtroom knew it. She slipped on the black suit jacket she’d draped over her chair after the jury left.

The courtroom was still, as, one by one, the jurors examined the pictures. A few covered their mouths, while others winced as if they’d been punched. The men winced and squirmed, and several of the women narrowed their eyes and ground their teeth as they stared at Dwayne Reed.

He was twenty three, six feet tall, with a broad, muscled torso and a tattoo of fingers curled into a fist creeping above his shirt collar against his ebony skin. Head down and slumped forward in his chair, picking at his fingernails, he radiated boredom and resentment.

Alex had pounded away from the beginning of the trial at the absence of physical evidence that implicated her client, building a firewall against this exact moment, telling Dwayne she knew the judge would admit the photographs into evidence. She expected the jurors’ reactions, hoping they’d get past the photographs once they began deliberations, but Reed wasn’t making it any easier.

“Sit up and act like you give a shit,” she whispered to him.

Reed straightened, barely moving his lips. “I’m fucked and we both know it.”

Alex kept her voice low. “We knew the pictures were coming in. They’re bad, but they’re not the money.”

She’d explained the money to Reed when she was appointed to represent him. Sitting in a room reserved for prisoners and their lawyers at the Jackson County jail, he’d told her the same thing all her clients told her the first time she met them even though she hadn’t asked. She never asked.

“Of course not. But you’re probably not going to take the stand, so I need to know about the money.”

“Whadda you mean, the money? I ain’t charged with no robbery.”

“The money is whatever the prosecutor will bank on to convince the jury to give you the needle, and I need to know what it is if I’m going to save your life.”

Dwayne had rolled his eyes to the ceiling and looked everywhere but at her, his dark face a defiant mask.

“Damn, girl, I don’t know nuthin’ about no money.”

Reed hadn’t changed his story, leaving it to Alex to find the money and figure out what to do about it.

Bradshaw turned to the jury, swelling his chest. Wearing his navy blue convict the killer suit, he let a conspiratorial smile leak from the corners of his mouth, telling them that this was the moment they’d all been waiting for.

Kalena Greene, the assistant prosecutor so new all Bradshaw would let her do was take notes and escort witnesses, opened the heavy oak door at the back of the courtroom, leaning her slight shoulder into it.

Jameer Henderson stepped inside and stopped, sniffing the air, his eyes darting from side to side. He wiped his round, smooth face with a handkerchief, then stuffed the square in his pocket and shook one leg, then the other, his pants riding up and putting a sharp creasein his crotch, his belly hanging over his belt.

Reed looked at Henderson, and Alex watched her client’s eyes pop, his pupils dilating, the involuntary reactions reminding her of a lesson she’d learned too many times. They all lied to their lawyer about something, and the more important it was, the bigger the lie they told.

“He the money?” Reed whispered.

Reed squeezed her wrist, his eyes cold and hard, the sour smell of the jail oozing through his pores.

“I ain’t gonna get another chance. You got this?”

Alex had been a public defender for fifteen years, and Reed was just the latest accused murderer she’d represented. If she let the Dwayne Reeds of the world shake her, she’d never be able to give them the same measure of justice the rich and well bred received. That’s what everyone, guilty or innocent, highborn or low, deserved, and that’s why she’d become a public defender. At times like this, that higher calling mattered to her more than what her clients had done.

She pulled her wrist free and nodded. “Yeah. I got this.”