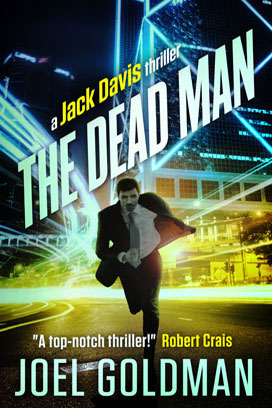 And the world turns to black. Death comes for all of us. But it comes like a thief in the night. Not predicted in excruciating detail in a dream. Right? Wrong!

A Kansas City billionaire recruits subjects for his neuroscience research delving deeply into the mysterious neural pathways of memory and dreams. But something has gone terribly wrong. Research participants are having horrific nightmares, their dreams coming true with deadly consequences. It sounds like some kind of twilight zone madness. But people are dying. Their blood cries out. And Jack Davis, now an ex-FBI agent, must answer that call.

Jack fights his own demons, battling the rare movement disorder that forced him out of the FBI. His debilitating flare-ups put his life on the line as he investigates rage-filled murders and uncovers secrets, shattering long-held illusions and raising ghosts better left dead.

Grab your copy of The Dead Man today and get ready for heart pounding suspense!

The Dead Man marks the second heart stopping crime thriller novel in my Jack Davis Thriller Series. If you live for the thrill of John Grisham’s and James Patterson’s white-knuckle plot twists and suspense, you better clear your schedule when you read The Dead Man. You won’t want to put this fast-moving thrill ride down.

My experience in the US legal system, police and FBI procedures shines through for total authenticity, making the other best-selling Jack Davis Thrillers, Shakedown and No Way Out, a must for any serious crime fan.

Prepare to stay up all night with the very best in American crime thriller novels.

The Dead Man - Chapter One

Sheriff Ed Beedles grabbed the barrel of his shotgun, yanking it from the rack in his patrol car. He knew Charlie Brennan well enough to know better, but there he was, standing in front of his brother’s farmhouse not fifty feet in front of him, covered in blood, one arm wrapped over his ten-year-old niece, Maggie, clutching her like she was a hostage, the girl wearing nothing but a nightgown, shivering in the cold. The dispatcher had taken Charlie’s call thirty minutes ago, Charlie screaming at her that Sam and Gretchen were dead and that he had Maggie.

The Brennan place was twenty miles south of the sheriff’s headquarters in the Johnson County courthouse in Olathe. He’d made good time, taking advantage of the new highway, Interstate 35, that had opened earlier in the year, making it to Spring Hill in twenty minutes, then heading west and busting it over the last few miles of rough county road. He fishtailed making the turn into the Brennans’ property, tires spitting gravel and ice laid down in last week’s storm,siren blaring, his heart riding in his throat the last quarter mile to the farmhouse. He was first on the scene, his deputy Tom Goodell, and two ambulances five minutes behind.

It had been three weeks since the Clutter family had been slaughtered in their farmhouse near Holcomb. That was a good four hundred miles west, but there had been no arrests and every lawman in the state was on edge, scared the killers would strike again.

Still, Beedles knew it was more likely that Charlie had killed his brother and sister-in-law than some faceless maniacs, most murders being committed by people who knew their victims. He’d heard talk of trouble between the brothers, something about the land their parents left them, but as far as he knew, it was just talk.

He opened his car door and stepped out, keeping the door between him and Charlie, the shotgun invisible at his side. The farmhouse sat on a rise, sheltered on three sides from the wind by stands of maples and oaks. It had been daylight for an hour, the sky heavy and close with leaden clouds, the wind cold and stiff enough to make a man deaf.

“They’re dead! Both of them.” A rose mist floated off of Charlie, fresh blood mixing with the frozen air.

“Then we can’t do anything for them but we can take care of Maggie. Now let her go.”

Beedles didn’t see a weapon in either of Charlie’s hands but that didn’t mean he was innocent or unarmed. He could be both and also be unhinged by what he’d seen, making him dangerous in another way.

Beedles started a slow walk toward Charlie and Maggie, keeping the shotgun aimed at the ground. His deputy and the ambulances would come storming into the yard any second, no way to tell how Charlie would react to the added commotion.

“It’s no good,” Charlie said, tightening his grip on the girl. “They’re dead! Cut to pieces!”

“And that’s a terrible thing. Let’s not make it any worse.”

Beedles closed the distance between them, leveling the shotgun at Charlie. Though he couldn’t shoot Charlie without shredding Maggie with buckshot, he knew the sight of that gun pointed at Charlie couldn’t help but make him focus on his mortality.

Charlie stared at the shotgun. “Ed, you don’t think I killed them, do you?”

They were ten feet apart. Charlie’s hands, arms, and chest were soaked in blood. Maggie’s face was streaked with crimson, honey-colored bangs falling over her eyes, her lips blue, her nightgown blood splattered. Beedles stepped closer, raising the shotgun at Charlie’s face; Charlie’s eyes opened wide like day lilies under the sun.

“I don’t think anything, Charlie. I just want to have a look at Maggie, make sure she’s okay. Then you and I can talk about what happened. That be all right with you?”

Deputy Goodell’s cruiser skidded to a stop, flanking Beedles, Charlie, and the girl. Using his open car door for cover, he drew his handgun, taking a two-fisted aim at Charlie Brennan.

“How about it, Charlie, we okay?” Beedles asked.

Beedles lowered his shotgun, reaching for Maggie with his free hand. “Come here, sweetheart,” he said.

Maggie slipped out from under Charlie’s arm and put her hand in his. Beedles squeezed her hand and she squeezed his, surprising Beedles with her calm strength, as if the blood on her fingers was nail polish.

Over the next hours and days, Charlie Brennan told his story again and again to Sheriff Beedles, the district attorney, the polygraph examiner, and his lawyer, never changing a word, sentence, or paragraph. He and his brother had put their hard feelings behind. He’d come to pick up his brother so they could repair a bad stretch of fence they shared. No one answered when he rang the bell. The door was unlocked so he went in and called out for Sam and Gretchen. When they didn’t respond, he went looking and found them stabbed to death in their bed. He got their blood on him when he cradled their bodies in his arms, going crazy at the sight of them. He found Maggie hiding in thebushes beneath her second floor bedroom. The polygraph examiner said that Charlie was truthful in all measures and no charges were filed against him.

Maggie Brennan’s story corroborated her uncle. She said that she was awakened by cries coming from her parents’ bedroom. Then she heard footsteps coming toward her bedroom. It was dark. Someone grabbed her but his hands were too wet and slippery with blood to hold her. She freed herself and ran onto the balcony off her bedroom, jumping over the rail, her only injury a sprained ankle. She ran into a nearby field, staying there until daylight, coming back and hiding in the bushes beneath her bedroom, too frightened to go inside the house, remaining there until her uncle found her. She spoke without tears; a doctor who examined her explained that she was too shocked to cry, assuring Beedles that it was best if she buried the memories of that night.

Beedles walked through the Brennan farmhouse dozens of times, re-creating the killer’s path, tracing the blood trail from Sam and Gretchen’s bedroom to Maggie’s. He opened the French doors onto her balcony, stood at the rail, and marveled at the courage of a ten-year-old girl to escape from the killer and jump from such a height.

Charlie Brennan sent Maggie to live with his sister in California. He never set foot on his brother’s farm again, selling it in the spring and sending the money to his sister to pay for Maggie’s upbringing. That night, he got drunk and was killed when he drove his pickup truck into a concrete culvert.

When Richard Hickock and Perry Smith were arrested for the Clutter family murders, Beedles drove to Garden City to question them. They denied the killings and there was no evidence to link them to the Brennan case.

No murder weapon was ever found. No one was ever charged with the murders of Sam and Gretchen Brennan. It wasn’t the only unsolved crime during Beedles’s years as sheriff but it was the one that woke him up at night until the day he died.