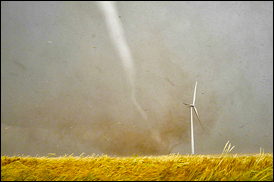 I’m starting to understand how important the weather is to my British readers. You’re about as obsessed with it as Kansas City natives!

Welcome to my world, where we regularly get hailstones the size of small mammals, snow blankets our streets for weeks, and the heat and humidity soar way beyond the comfort zone.

Our weather follows the same pattern as yours: spring, summer, autumn, winter. While you’re shivering in the UK, Kansas City is just as cold. It doesn’t climb much beyond 3 degrees Centigrade in January, and February carries on the theme. We get less rain and more winter sun, with wide blue arching skies and air as clear as cool water. Our summer days regularly reach 31C, though this summer has been a lot hotter. You got stuck with the wet end of the wayward Jet Stream, we got the other end with months of boiling, arid days and baked-dry nights.

So far so good. But it’s Kansas City’s weather extremes that hit the headlines with tornados, thunderstorms, white-outs, deadly black ice, humidity, hail and howling gales. Like you, we don’t have time to get bored with it. As we say, if you don’t like the weather in Kansas City, just wait fifteen minutes and it’ll change.

Situated in the middle of the US Tornado Alley, tornados are part of the scenery in my home town. We live with it and sometimes it strikes very close to home.

One day last summer, I was working at my kitchen table when the sky turned dark green and the clouds began to boil. I paid little attention because that’s not unusual around here but when the warning sirens sounded, I perked up, turned on the television, watching and listening as the weatherman described a tornado that was on the ground and spinning its way right toward my house. The dogs and I retreated to my basement office (no windows) and took cover under my desk on which I’d placed an inflated queen size mattress. The tornado had the good sense to skip over my house and land a short distance away without causing any major damage.

The next day I was at a local grocery store that also serves salads and sandwiches. One of the chefs told me that as the tornado approached their store they began herding customers into a large walk-in refrigerator when two customers pulled up, got out of their car and asked if they could order something to take out. Despite the danger, many people who live in this part of the country ignore these storms at their peril. Some even hop in their cars and chase after the tornados, video camera in hand. It’s an odd kind of sport.

The weather in my crime novels

Lou Mason has his own personal calendar for the seasons, devised in elementary school. It’s a lot simpler than remembering the equinox and appeals to his optimistic off-balance logic. Jack’s cases unfold against a stage rich in weather imagery. I like to weave it through my thrillers, partly because the weather is an everyday part of Kansas City life, and partly because its extremes help me create a vivid backdrop for the action in my crime novels.

It’s good to know I can ask my British readers “What’s the weather like where you are?” and you’ll know where I’m coming from!

So, what’s the weather like today where you are?