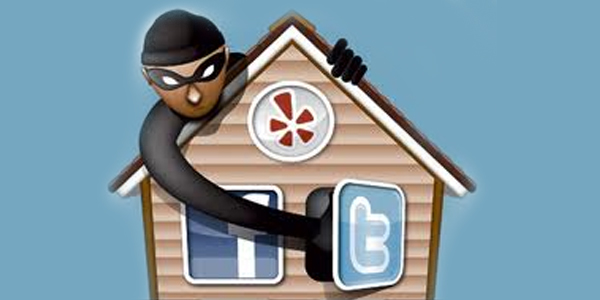 Whether or not you “LIKE” social media, platforms like Facebook, Pinterest, Google Plus, and Twitter, they provide a great way to stay connected with your family and friends. These sites have expanded in popularity to an increasingly broad demographic of users. Parents and grandparents routinely keep up with the latest happenings and photos of their children and grandchildren on the various social media platforms. And businesses use them to promote their brands to the public.

But, family, close friends, and businesses don’t represent the only people with access to your favorite social media channels and many users are up to no good. Some are even downright criminal. All of this sharing has resulted in an artificial level of comfort for some shortsighted surfers who likely regret the over-sharing of their nefarious activities for all to see…including the long arm of the law.

As a best selling crime thriller author, I’m always looking to real life crime stories to inspire my next book project. Social media has added an extra channel from which crime news stories can emerge. Just more material for a former trial-lawyer-turned-author like me.

Warning:  you may “UNLIKE” some of the crime stories you are about to read.

Teen Faces Jail After Posting About Toilet Crime in Library

A 16 year-old teen from Portsmouth, UK, filled all the toilets at a Portsmouth Central Library third floor men’s room with toilet tissue as well as turning all the taps on full throttle. His intent? To deliberately flood the library. Although he claimed innocence at first, he changed his story when the prosecutor showed a transcript of Facebook posts and comments he made, bragging about creating the flood. The real crime? All of those books—wet books.

Pennsylvania Teen Tries to Hire a Hitman Via Facebook

A 19 year-old teen from Pennsylvania admitted using Facebook in attempts to hire a hit man to kill a woman who accused him of rape. His post offered “$500 for a girl’s head. Who wants this bread?” Later, he posts again about the urgency of “getting this girl knocked off right now”. He faces up to 22 years in prison for his crimes. All the local police had to do was log-on to Facebook to nab this wanted teen in the act.

Two young men, Jameg Blake and Kwame Dancy, in love with the same woman exchanged insults via Twitter for days. The love triangle heated up and Dancy tweeted a death threat aimed at Blake, telling him “betta chill asap”. In response to the Tweet threat, Blake shot his childhood friend, Dancy with a shotgun, tweeting, “R.I.P. Kwame”, immediately afterwards. #irony

Man Faces Prison Time for Bragging About His Crime on YouTube

The man posted a video of himself on YouTube holding a gun, while (jokingly) pleading guilty of unlawful possession of a firearm. The Arlington, Virginia man was a felon and forbidden to possess a firearm of any kind. Not only that, the gun was manufactured outside the state, making the unlawful possession a federal crime. The 37 year-old man faces up to 10 years in prison. Not sure whether this is an argument for gun control or self-control; or both.

Perhaps using Facebook to brag about crimes has gotten old. Certainly, 19 year-old bank robber, Hanna Sabata, thought so. She used YouTube to brag about her heist and get her 15 minutes of fame. Not only does she smoke marijuana on the video, she details how she pulled off the robbery by using a gun, a note, and a pillowcase. She also talks about how she’ll use the money and, finally, poses for the camera with all the cash. Hope those new shoes are still in fashion when she’s back on the outside. #justsayin

Police departments across the country have embraced the idea of using social media sites for everything from soliciting crime tips to monitoring the activities of crime suspects. In addition, social sharing sites like Facebook and Twitter can give law enforcement an additional way to disseminate information quickly and to interact with the public. So, criminals beware! You never know who may see what you do when you think no one is watching.

No Responses to “The Dark Side of Social Media – Crimes, Confessions and Cops”