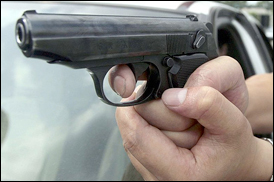 US and British crime novels are similar in many ways. After all, we’re human on both sides of the Atlantic. The protagonists have the same emotional issues, eccentricities, foibles and habits. And the heroes and heroines face the same challenges: catch the baddies, save the goodies. But in the USA the police and most of the private dicks we love reading about pack serious fire power… they have guns.

Watching The World’s Worst Police Shootouts on TV a while back, I was shocked by one particular video clip. A middle aged lady ran out of her house on a tidy Mid-West suburban street, obviously distressed, brandishing a small kitchen knife. The two attending cops hesitated for a few seconds then, when she staggered towards them dressed in nothing but her nightie, they panicked and shot her.

Blimey. If I was a bit pissed off (or just pissed) and ran out of the house knicker-less, waving a knife, I could do so in the certain knowledge that I wouldn’t be shot. The police would probably talk me down. Or, worst case scenario, rugby-tackle me. They’d do a jolly decent job of calming things down armed with nothing more than truncheons, silly hats and sympathy. But it’d be nowhere near as exciting for observers. Or would it?

Are crime thrillers more intense when the bullets fly? Is it less of a challenge to craft an agonisingly tense plot when your characters are armed to the teeth, brimming with ready-made literary tension? The risk of death, destruction and disaster are certainly greater and the stakes a lot higher.

Oddly enough I can’t remember ever consciously thinking that a plot would be chunkier and more satisfying if the stars of the show had access to firepower. You can give characters all the guns you like but if it’s a crap plot, it remains crap. Conversely you can give your hero nothing more than bare fists and ingenuity to work with but if the story you’re weaving is as flat as a fart, it won’t make any difference.

It seems to me that whether people are running around waving AK47s with nukes at the ready, or sitting targets with nothing more than a few canny expletives and native wit to protect themselves, a great plot is a great plot.

Not all US crime novels bristle with guns, mind you. Joel’s Lou Mason doesn’t carry a gun and doesn’t like them much either. Jack Davis does, but he’s an ex-cop and he’d probably be lost without one…

Have you ever finished a British crime novel feeling dissatisfied because the action wasn’t action-filled enough? If so, would adding guns into the equation have made all the difference?

2 Responses to “What if British crime novel heroes packed firepower?”